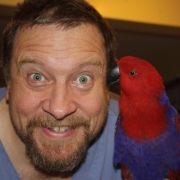 Observations about parrots and other exotic pet birds from the reference of the owners/operators of the Northeast Avian Rescue.
Font size: + –
Subscribe to this blog post
Print
Bookmark

In the rescue game, there are good days and bad days, and you rarely plan for which days are going to go which way. Dealing with people who want to argue the policies or question the reasons for having them in the first place ... it's a pretty constant drone and it can really get old after a while. Sometimes it feels like a pretty thankless job and we wonder why we even bother.

We got a call last week from a small, independent hotel in Queens, NY. The story, one rescues hear more than they want to ... A bunch of birds ("A Blue Macaw, African Gray, Mexican Pinch Amazon and between 20 and 50 parakeets"), need to be removed from the hotel immediately. Why? Because they are disruptive and they attract pests.

So we contacted the hotel and let them know that we will make room for these birds in the rescue immediately. Question: When can you get the birds to us? Answer: It would be inconvenient for us to come up there, you should come here.

It would have been easy to explain the inconvenience of leaving the rescue for the day and driving 130 miles in each direction in order to right the wrong they had committed in having parrots become residents in a hotel in the first place. But of course, we made plans to visit Queens on our Sunday rather than spend the day scouting land for our new rescue facility.

At the hotel, sporting a garish collection of every kind of Central and Eastern Asian bric-a-brac you could possibly think of (including a wall mounted aquarium that completely surrounds the "cage" window in the lobby, all but obscuring it from anyone walking in for the first time), we were met with a couple very helpful hotel employees and escorted to:

Yes, that's right. The birds were being housed on the roof of the hotel. The "room" they were in had a roof over it, but was open on two sides. The birds were, for all intents and purposes, open to the elements. Given that the helpers could speak almost no English, it was impossible to determine how long they had been up there. There were no pigeons or vermin to be seen upon our arrival, but it didn't take a lot of imagination to think of what these birds had seen or been subjected to while on the roof, even if it was only for a few days.

The macaw, in great feather aside from a feather trim -- no, not the wing feathers, but the TAIL FEATHERS -- allowed himself to be pet on the head, but would not step up. The only sign of neglect was a badly misshapen lower beak that can easily be repaired over time. He didn't fight when he was toweled and was easily placed into a crate.

The gray, friendly to a fault, stepped right up on the man's arm. I asked if he could fly and the man said, "No." (We found out later he was actually fully flighted!!!) He also went into a crate without event.

The Amazon, a Mexican Redhead ("Pinch" must've been a Freudian slip from the person filling out the form, because that bird wants nothing more than to pinch off a little bit of flesh!) had to be toweled, but did not fight. He too was placed in a crate.

Then came the parakeets. Fourteen in total, so that was one blessing -- it wasn't 50. But they were in cages that could not be easily moved, and where would we move them? We were on the roof! After some thought, we decided to remove dishes and go at them from the food doors. My arm barely fit through the door, but that was good -- nobody getting out around that! The first cage, smaller, was easy to empty -- half the birds successfully crated. The second cage was bigger, what we commonly refer to as a "cockatiel flight cage." With the help of one man on the other side, Jill on the back and the other helper on the front, they kind of waved them in my direction and I grabbed them where I could. Brilliant!

Brilliant, that is, until one of the helpers decided to open the front of the cage to grab one himself -- apparently I wasn't doing it fast enough. While every one of these feral 'keets tried to take a mouthful of flesh on the way into the crate, I let them bite and got them into safety. The helper ... not so much. As soon as he got one of the parakeets out of the cage, it bit him -- and he let go of it. Away it went. I couldn't tell whether Jill was having a stroke or going into a homicidal rage, but we started chasing this bird around the tiny "enclosure." Almost had him several times, but eventually he got out onto the open roof. We thought all was lost for this little guy until finally, exhausted by his ordeal and weak from the CRAP he had been fed for his whole life, he let himself be caught. SUCCESS!!!

So we got the rest of the 'keets and got the hell out of there. Once home, we set the birds up in our quarantine room, which thankfully had been empty, so no re-starting quarantine for the birds already there. Once they were all safe and sound (with the macaw and Amazon immediately going for the pellets in their bowls - YAY!), we took a step back to survey the day's work.

This pain in the ass was the KICK in the ass I needed to remember why we are here and why what we do is more important. Had we not gotten them, they would have either been sold or given away to the first derelict to pass the hotel or, worse, would have been set free, to their unquestionable demise. We changed the course of their destiny. We RESCUED them.

We saved seventeen precious lives on Sunday. THAT is why we do this. Let's face it: 90% of the birds coming into the rescue are simply changing hands. Someone either doesn't want to, or can't, keep them any more. No drama, no big story to tell. But occasionally we have to get out there and do something that, if we don't, could spell a horrible future or even death for these glorious, beautiful and spectacular animals. At times like these, we earn our namesake, for we are a RESCUE.

Yeah, I'm tooting our horn today. I think we earned it. These birds might be able to "talk," but in most circumstances they have no voice, be it not for organizations like ours. The Queens Hotel Birds will have a bright future and NEAR will strive forward, waiting for our next call to duty.

Robert Lewis is the Outreach Director and Adoption Coordinator for Northeast Avian Rescue.  In additionto his work with NEAR, Robert is also one of the co-founders of the Northeast Parrot Placement Cooperative (NEPPCO), a consortium of parrot rescues, sanctuaries, clubs and avian veterinarians covering the Northeastern United States.

No comments made yet. Be the first to submit a comment
© 2019 by Northeast Avian Rescue, Inc.